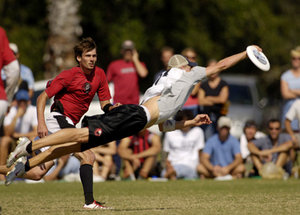 Combining the non-stop movement and athletic endurance of soccer with the aerial passing skills of football, a game of Ultimate is played by two seven-player squads with a high-tech plastic disc on a field similar to football. The object of the game is to score by catching a pass in the opponent’s end zone. A player must stop running while in possession of the disc, but may pivot and pass to any of the other receivers on the field.

Ultimate is a transition game in which players move quickly from offense to defense on turnovers that occur with a dropped pass, an interception, a pass out of bounds, or when a player is caught holding the disc for more than ten seconds. Ultimate is governed by Spirit of the Game™, a tradition of sportsmanship that places the responsibility for fair play on the players rather than referees.

Ultimate is played in more than 42 countries by hundreds of thousands of men and women, girls and boys.

UPA Board of Directors Definition of the Sport of Ultimate

"What is Ultimate?" as defined by the UPA Board of Directors? The UPA umbrella is broad but does not cover every disc-related sport. The UPA Board of Directors believes that one key factor that defines Ultimate is that the players need to be the ones in control, even if it's a professional league, even if there are referees, even if it's played on sand with 4 players to a team. The definition developed by the Board at the 2001 Strategic Planning Meeting is as follows:

"Player defined and controlled non-contact team sport played with a flying disc on a playing surface with end zones in which all actions are governed by the 'Spirit of the Game™.'"

‹ About Disc Sports up History of Ultimate ›