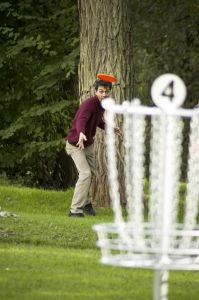 Disc golf, in some form, has probably been played since the early 1900s. But the modern day disc golf started in the late 60's. George Sappenfield, a Californian, realized that golf would be a lot of fun if played with Frisbees®. He set up an object course for kids to play on. The early Frisbee® Golf Courses were "Object Courses" using anything from lamp poles to fire hydrants as targets and begin to crop up in the Midwest and East Coast. A year later Sappenfield introduced the game to many other Frisbee® players. Many of them brought the game back to the U.C. Berkeley campus. It quickly became popular and they laid out a permanent course in 1970.

The first standardized target course was put in by "Steady Ed" Headrick, a great flying disc innovator known as the "Father of Disc Golf", in what was then known as Oak Grove Park in La Canada Flintridge, California. (Today the park is known as Hahamonga Watershed Park). This park is immediately to the south of the Jet Propulsion Laboratory, which supplied at least a few of the earliest players. Ed worked for the San Gabriel, California-based Wham-O Corporation and is credited for pioneering the modern era of disc sports.